There have been particular and special journeys. Marriage, children, vocation(s) trips and holidays. These are some of them – as I recount them in time.

My first big journey occurred in January 1954. My parents took me from Rotterdam, still affected by the results of World War 11, to Mepunga West. On January the 5th 1954 we left Amsterdam on the Johan van Oldenbarnevelt. We were farewelled by two young uncles from each side of the family – Cor Stok and Theo van Meggelen. When we arrived in Melbourne on the 4th of February we were welcomed by two different uncles – Adrian and John van Meggelen who had arrived, just over two years earlier, on February 7th. It was the beginning of a radically new life in unfamiliar surroundings.

Me on the Johan Van Oldenbarnevelt

My mother recalls being surprised by the amount of “road kill” on the 180 km journey from Melbourne to Mepunga West. In the stifling warmth of the Aussie summer, she also remembers the alarm she felt as insects buzzed around and hit the walls and ceiling as she lay in her bed on her first night in Australia. In time, all these things would become familiar.

We lived with the Anderson family for a few months – Ola, Beth and old Mrs Anderson. In later years this became the place of regular holidays in the summer. I learned to ride a horse, drive a jeep, play tennis, milk cows, use a knife and fork Aussie style and so many other useful things.

Looking back, this was a most amazing time and place. The generosity of these wonderful people allowed me to see a life that would have been hidden and secret otherwise. But like so many truths, you only realise these things later in life – and too late to say thank you. 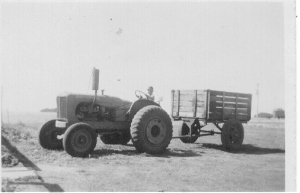 Me on a tractor at "The Hill" Mepunga West

Some more of my reflections of  “The Hill” can be found here. Looking back with the hindsight of age – it was a most wonderful privilege and blessing.

One thought on “1. Reaching the Promised Land”