Recently someone asked us how we go camping overseas. All our camping gear fits into a suitcase. Tent, camping stove, mats, sleeping bags – all come in at 10 kgs. Plates and batteries for our headlights we pick up when we arrive.

Our philosophy is that we go overseas to see the sights, not to luxuriate in hotels. The cost of three nights camping is roughly equivalent to one night in moderately priced accommodation. We have done this from the Arctic Circle in Norway to the southern extremities of Tasmania.

The downside is that the weather can sometimes overwhelm us, or, as occurred recently, our trusty tent failed us and we were swamped in our tent on our first night in Spain. But Decathlon had a good range of tents and the new tent has already paid for itself.

The upside is priceless. We have camped in some of the most spectacular scenery imaginable. The list is long, here are some of the highlights: the Grand Canyon, the Lorelei rock overlooking the Rhine River, Hells Gates in Tasmania (Tassie has many), Gudvangen in Norway (again, like Tassie, many more), the Murray river, Torla in Spain, on the lakes or coast of Sweden …

There are times when we pike out, like the time when it rained for a week straight during a European Summer. When we got to Heidelberg, still raining, we opted for a cabin. Then there was the time in Cuenca when the campsite let us down and a local hotel offered us a special rate. Another time we just wanted to experience living in a Ducal palace so we did that in Zafra. Those two nights could have paid for 12 or more nights camping. But it was a special treat.

How long can we do this for? My wife has no problem sitting on the ground for long periods of time, whereas my back is starting to complain. A cheap chair from Decathlon might be the answer. But we both know that we will continue to do this as long as our bodies allow us too. Most friends, and certainly fellow campers, think we are as mad as cut snakes, but my wife doesn’t care what other people think and every year I am growing to be more like her.

y wife and I go camping it is very unusual if we don’t end up near water. We love camping near rivers, lakes and, especially,the ocean.  Some of our most memorable camping experiences have been next to water of some sort.  In a blog I did over a year ago – Our Top Ten Camping spots, the majority of them were next to water. Even in the arid country of the Grand Canyon the Colorado river still surged through the ravine.

Water has moods.  Water is almost human in the way it moves from c

almness to fury and back again. A raging angry river, a placid sea or an agitated lake all remind us of traits in ourselves.  There are other aspects. Some watery places are secluded and intimate, others are large and expansive and still others are mischievous or treacherous.  Recently walking along the beach I noted that the most dangerous part of the ocean wasn’t the foaming surf but the dark rip of water that could have taken an unsuspecting swimmer hundreds of terrifying metres  out into the ocean.

But of all the watery places it is the sea that always gives me glimpses of the Creator.  It is untameable and vast.  The sea reminds me of my own smallness and vulnerability.  And yet, when I am in ship or boat it holds me and takes me great distances.  It brought me to Australia as a child, I paddle at its edges and I can ride its waves.  Yet it is always the sea. It continues to have a mind of its own and nothing I do will change it.

As I was trying to paint the outside of the house in the howling wind today, my mind wandered back, as it does when the body is involved in mind numbing activities, to the trials of camping in the wind.

One particular event that came to mind was an evening in the delightful hamlet of Waratah in the Northwest of Tasmania. We arrived and the air was still. I pitched the tent but being lazy and seeing that the wind was absent I thought I would dispense with the extra guy ropes. We slept well for most of that night until a Bass Strait gale decided to descend at about 5:30 a.m. We were shocked into alertness when the staves of the tent started bending inwards at an alarming angle and the tent thought it was a plane on a runway preparing for take off. 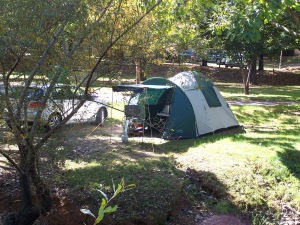 Camping on a quieter occasion

Scrambling out of our sleeping bags, my wife and I tried to get dressed but we had to do so with our posteriors pushed against the bucking and bending staves to stop them from snapping. After having made ourselves presentable for the outside world under extreme circumstances, we packed our gear and started  dismantling the tent. But I was too eager in my removal of the pegs with the consequence that the tent then decided it wanted to fly to Antarctica. In desperation I picked up the nearest weighty object at hand and threw it on the flailing tent – this happened to be the love of my life. While she was spread-eagled on the angry tent I tried to roll it up underneath her.

Surprisingly, I accomplished this, and kept the marriage intact – which was good, as we still had many hours together in the car to manage that day.

Moral: In the future prepare for the worst and hope for the best.

When We Didn’t Find a Camp Ground in Time

A while back I wrote about our favourite camping places. There have been times when we didn’t get to a camping place in time and we had to resort to sleeping in the car. Here are our non camping places.

1. In 2003 we arrived at our camping place in the Champagne region of France far too late. The gates were closed and the lights off. So we drove down a country lane and parked close to the grape vines. Trying to sleep in a Skoda Fabia is not an ideal way to spend a night. But at least were in a great part of France!

An Opel Mariva in Provence. Not an ideal car for sleeping in!

2. On the same trip we arrived late on the outskirts of Verona after crossing the Appennines in Winter. We stopped in an industrial car-park. Still in the Fabia we tried to sleep, my wife on the back seat and me in the front. I was kept awake by a series of furtive and clandestine exchanges made between trucks. Then a well dressed lady arrived at 2am in a BMW and left in a Mercedes.  She returned an hour later and also had me guessing.

3. Previously  I mentioned the brilliant camping places in Norway. The truck stop outside Drammen is not one of them. The Volvo S60 was more comfortable than the Fabia but it was still a car. Then again, the continuous heavy rain made the car more preferable to the tent.

4. Coming back from Germany one evening in the pouring rain we parked at a
truck stop just outside Venlo. This is not one of recommendations either.

5.  The final overnight stop occurred when we dropped of our daughter in Geneva so she could catch a train to Zurich. We were dead tired as we had already survived a blizzard while driving over the mountains towards Grenoble. That was a harrowing drive with the fog and snow, and quite a few vehicles involved in accidents. We couldn’t stop as there was nowhere, we could see, to leave the road. So finally we arrived at a hotel just outside Geneva without a booking. We were informed that the minimum stay was three nights and the total cost would be well over 600 Euro – and we only wanted to stay one night! I was that tired I couldn’t drive safely any further. So we parked in front of the hotel which was part of a shopping centre and saved 600 Euro.

So just as there are some spectacular places to camp, every now and then, the car has to be the last resort – the very last resort!