To all those poor souls who happen to be related to me I have a request: I am collecting material for an anecdotal history of my family. I would love to have recollections, anecdotes, stories, impressions and etc. of the Stoks – Maarten, Truus and so on. To help me collect them can you write them as comments below. 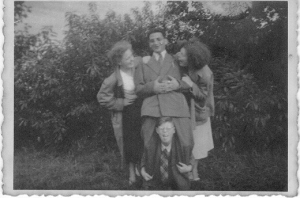 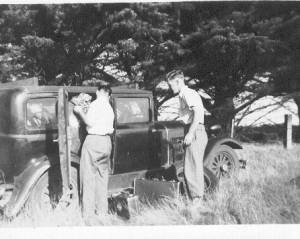 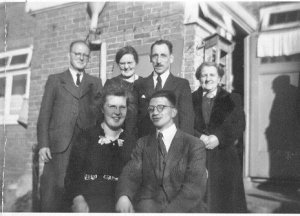 Maarten & Truus with their parents

Maarten, Truus and me

Maarten, Truus and me

Dad and his sisters Trudy & Jo 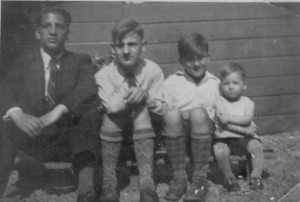 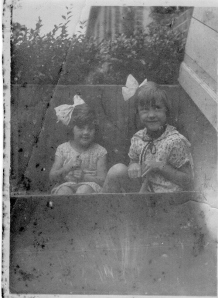 I was sitting next to mum’s bed yesterday (Sunday 27th Nov 2011) as she was sleeping fitfully. It had been difficult to talk to mum as she was delirious and confused so I was glad she was sleeping. Although she enjoyed the Bible reading from Psalm 139 and the prayer I prayed with her. Then as she slept I reflected on her 89 years.

She was born just after WW1 and before the depression. Being the first in a large family meant growing responsibility every year. This also increased the more her father became ill. By the time of the Depression there were already 5 children in the family and it would still more than double in size by the time of the war. As soon as she could she left school to help support the family.

After the war she had a serious bout of illness (pleurisy)  but by 1947 she was married to dad. They lived in an attic in Gerrit vandeLindestraat – this is where I was born. Soon after mum had twins which didn’t survive. Looking back this seems to have due to the Rh negative – Rhesus factor. By 1954 she left her family behind – never to see her parents again.

She worked at Fords, later helped dad with his business, took on house cleaning and worked in a children’s rest home. She did all these things resolutely. In the late 1960’s there were the first signs of, what we later found out was, MS. I remember mum jogging around the block because she was concerned about her fitness. The second half of her life was plagued by this disease. But she was always resolute. Stubbornly she refused to let the disease stop her.

For a while she helped dad on the farm – this was part of the dream they had together. But soon that was too difficult. However, as some of the comments below reflect, she was always active with crafts.

When dad died we thought she would need to go into a home, but she would have none of it and remained there for another 7(?) years. Finally her doctor Janet van Leerdam found a place for her at the Heytesbury Lodge Nursing Hostel in Cobden.

Even in recent years she has had a couple of close calls in hospital and each time she has come through the trauma.

As I sit next to the bed I am thankful for a faithful mother who lived a Godly life. And I also know that this God has her safely in His hands – whatever happens next.

Mum’s Passing to her reward

Reflections from the Worship Service

The Eulogy given by mum’s brother Adrian:

The Family at the Interment

Geertrui Sophia van Meggelen better known by the name of Truus was born on the 13th of Nov 1922 in a town called Schiebroek very close to Rotterdam, where she was the first of 11 children 5 girls and 6 boys.    The family later moved to Rotterdam where Father worked as a bread carter and he used a horse and wagon. When Truus was about 6 years old, she would go with father and would steer the horse from customer to customer while father would walk along the footpath.  Different times she has told that story and she very much enjoyed that time. Later on they moved to Hillegersberg where the family lived in a rented house for about 70 years.
It was when  living in Hillegersberg that she started school and when she finished her schooling, she started work  in the office of the bread factory where father used to work  (because of illness he never worked again).  Truus’s  earnings therefore contributed to the running of our family.
Truus was also very much involved with the youth activities of the church we went to.
On the 10th of May 1940, Germany declared war on The Netherlands. Four days later, early in the afternoon, Germany bombed the heart out of Rotterdam.  Truus’ office was very close to the heart of Rotterdam and she had gone to work as usual on this day.  Truus went through a very stressful time and was able to tell us about this when she came back after work. 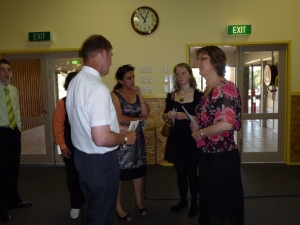 People Arriving for the Thanksgiving Service

About that time Truus met Maarten her future husband.  Soon after, Maarten was picked up by the German soldiers and forced to work in Germany. This was another stressful time. As well the post was very slow.
Maarten survived the war and married Truus in 1947, and in 1950 their first son was born.
In 1952 John, our brother, and me moved to Australia.  Truus and Maarten started to question us about coming to Australia.  I was very careful with my answers. I did not portray Australia as a country which had plenty of work for unskilled people. I tried to put across that with hard work there are possibilities.
In 1954 the three arrived in Australia and were very warmly welcomed by the Anderson family in Mepunga who helped them by providing accommodation and finding jobs in the first few weeks as they settled in. The friendship with the Anderson family has lasted until this day.
I remember Truus as: