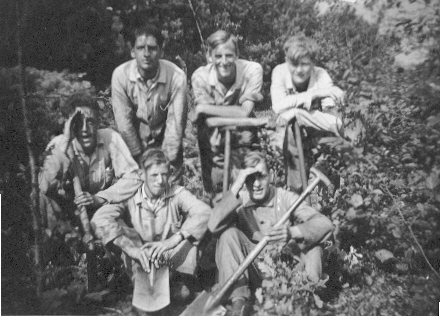 My dad and fellow workers in WW2. Dad is top left.

I have reflected previously on some of my father’s experiences as a conscripted worker in Germany during WW2. (See here) Dutch workers had more freedom than others as the German authorities simply said, “If you abscond we will pick up your father to take your place.”

My father worked north of Berlin in a place called Hennigsdorf on the Havel river. In 1945 he and his fellow workers were liberated by the advancing Soviet armies. The workers found themselves in the midst of extremely harrowing battles as the German army made its last ditch stand.

One of the few detailed stories my dad told me about this part of his life centred on this liberation. By 1945 his clothes, and in particular shoes, were in a state of extreme deterioration. One of the liberating soldiers motioned (language being a useless option!) to my father that he should find a German soldier’s corpse with the right boot size and “liberate” them for his own use. I gather there were quite a few and they all wore high quality boots. But even after years of war my dad was still squeamish about such matters. The Russian soldier, seeing my dad’s reluctance, took off his own boots gave them to my dad and then went in search for an appropriately sized and equipped corpse.

Yes, it is a strange story, yet I have always seen it as an act of unusual, but real, grace. This was one of only a very few experiences that my father ever shared with me about that time of his life. The grace shown in the midst of horror was a memory he could share.