After the heights of Calvinism in Geneva, we went to the Abbey of Cluny today. It is a magnificent complex of buildings whose influence ranged over the pre reformational world. This abbey was the mother from which many others were set up, in England and France. It was an amazing picture of medieval devotion. Today its zeal was muted by tourists and bored French school groups. From there we went to the magnificent Cathedral at Orleans whose patron saint is Joan of Arc – a martyr of the French nation. Like many Cathedrals there are beggars at the door. The question as to what to what to do bothers me.

Yesterday we passed an accident on a country road. There were police cars and emergency vehicles. Cars were being redirected around the accident. On the side of the road was a body bag with a body in it. For me this was a stark reminder of the calling we have to represent Christ. Death may come at any moment (especially on French and Spanish roads) but we need to have a relationship with Christ – nothing is more important than that!

Tomorrow we plan to go to Chartres Cathedral and from their to Belgium to see family. 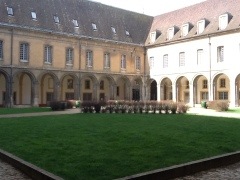