Larsson and Sorolla: A Study in Priorities 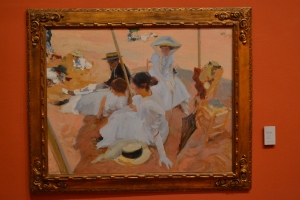 From the Sorolla Museum, Madrid

Let me begin by saying that I am not art expert. I belong to the “I know what I like” school of art. A school that many critics would deride.

What impresses me about these two men, is that what is important in their lives permeates their art. They cannot stop their passions being predominant in their work. And in both cases, the recurring theme is wife and family. Both men have so many works that celebrate family life – both formal and informal. The children, celebrations, family life, sadness and happiness are all revealed unapologetically in their art. 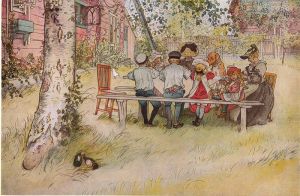 Breakfast Under the Big Birch Tree

You can visit the homes of both men in Madrid and Sundborn, and nearly a century later, family warmth still exudes from these places.

Both artists also reveal a connection with faith; Catholic and Lutheran. I cannot judge their hearts but it is clear that faith and its expression was a core part of each family.

Matt 6:21 states: “For where your treasure is, there your heart will be also.” 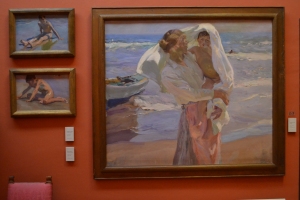 From the Sorolla Museum, Madrid

In a century’s time, if people were to explore and research our lives what would they deduce about our passions and priorities? Would it be obvious or vague? Distilled or ravelled? Would they find an example of C21st ego-centrism or someone unique and special, whose character defied the spirits of the age.

If anyone were (foolish enough) to look for a trace of me in years to come, I hope their conclusion would be that I was an imperfect man who had a passion for faith and family.