Is It Time For Another Reformation?

Recently an old friend from the Catholic tradition commented on a poem I had written about the importance of acknowledging those, from the past, who had paved the way for us. He reminded me that this goes back many generations. Not so subtlety he reflected that even for Protestants our origins go back to the Catholic tradition.

As I pondered further I considered the reasons for the Reformation. The reinstatement of the primacy of the Word, a return to “Grace alone” and the corruption in the Vatican at the time were all key issues. It took the church 1500 years to get to the point that the Reformation occurred. Despite the corruption in the church there were many bright lights and examples of Christlikeness. My readers will be aware of my occasional reference to Teresa of Avila. (See here  and here).  It wasn’t all bleak. Yet it has taken the Protestant tradition less than 500 years, since Luther nailed his theses on the door at Wittenberg in 1517, to come to a similar state. Instead of indulgences we have the “prosperity gospel” – selfishness in different clothes. The primacy of the Word is under strident attack. Issues that secular society seeks to reevaluate such as gay marriage and abortion are understandable, however that many in the church support these causes is not. And that is just the tip of the iceberg. 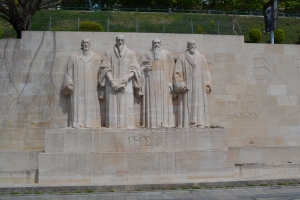 The point is this: the church must continually be reforming itself in the light of Scripture. In every new era as issues arise, the Word of God needs to be applied afresh to the times. The Catholic church recognised this with the Counter Reformation and the Vatican Councils. We may disagree with many of the outcomes but at least they understood the need for review.

On the immovable foundation of the Word of God, what do we need to reassess about ourselves, our values, our priorities – both as Christians and churches? Is it time for another reformation – a reformation that can trace its spiritual ancestry through those who, over the centuries, down to the early church have striven to be faithful to God, His Word, His Gospel and His Kingdom?

One thought on “Is It Time For Another Reformation?”