Blindness of the Heart

I have written previously about my father’s experience as an “conscripted” worker forced to work in Germany during World War 2. In the photo below, my dad (on the left) stands with two friends at a tram stop in Berlin in 1943. 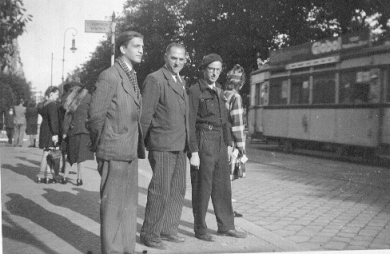 From the photo it is difficult to believe there is a horrendous war going on at the time it was taken. Almost four years of war have already been gone through, yet daily life, it seems, is going on as normal. Within the next two years allied troops would storm Berlin and it would become a divided city until the fall of the Berlin Wall in November 1989. The people of Germany may have had an inkling, but certainly no knowledge of, what was going to happen in the future. As best they could, they were living life as normally as possible.

We may have a variety of responses to this. They must have been blind, or foolish or wilfully ignorant. Or, maybe, they were caught in a trap of their leader’s making and they felt powerless to do anything about it.

So often we live like that too. Men are good at denying symptoms of a disease until it is too late. Parents see behaviour in their children that should alert them to dangers but continue pretending that everything is ok. Or most seriously, we know there is a spiritual dimension to our lives but we fail to respond to it.

The other day I reviewed a book by Francis Spufford “Unapologetic”. What I liked about it was the struggle that he revealed as he dealt with those spiritual questions. He didn’t push that “spiritual nagging” aside but opened his life to its challenging journey.

My dad was a man like that. He was the black sheep of his family and the church. He asked questions that no one could, or wanted to, answer. However, as a child growing up it was plain to me that my dad had an on going conversation/argument/relationship with God. There was never a doubt about God’s existence. My dad just struggled to understand God’s intentions, or at other times submit to His call on my dad’s life.

One of the spiritual legacies my father left to me was the image of a real God who comes into our lives. He also showed me that this was a dynamic, on going and relationship. So, unlike the people in the photo above, there was never any doubt about how “life’s story” would end and who was in control.