Whose Side, Mine or Yours?

Now when Joshua was near Jericho, he looked up and saw a man standing in front of him with a drawn sword in his hand. Joshua went up to him and asked, “Are you for us or for our enemies?”  “Neither,” he replied, “but as commander of the army of the Lord I have now come.” Then Joshua fell face-down to the ground in reverence, and asked him, “What message does my Lord have for his servant?” Joshua 5: 13 – 14

Joshua was given a simple but profound lesson. He was told, simply, that he was serving God and His kingdom and not the other way around. God had plans and purposes to initiate a King and a Kingdom. Joshua was part of that plan even though he could never comprehend the vastness or majesty of the outcome.

How often do we make the same mistake that Joshua made, that is, making God the servant of our whims, or at least, trying to. God’s plans are eternal and perfect. We should be grateful that He includes the likes of Joshua, and us. Like Joshua, we have yet to see the majesty and perfection of the return of the king.

The Morning Star of the C18th Welsh Revival

It is amazing the way that God works. Forces are arrayed against His plans only to be outwitted time and again.

This occurred (once again) in the years leading up to the Methodist Revival in Wales in the C18th. An Anglican minister, Griffith Jones, sometimes referred to as the “morning Light of the Welsh Revival” was often in trouble with his superiors for his unorthodox approaches. Dallimore references him in his biography of Whitefield. For example, Jones preached outdoors when the crowds became too large. This was not the “done thing.” In all, he was too enthusiastic for his times. So the authorities restricted his ability to preach. Now, this could seem like a defeat. However, Jones, undeterred, commenced a series of circulating schools (schools that would remain in an area for a while and then move on). Many thousands of people learned to read and were presented with the gospel through his work. It also provided a wonderful foundation for the revival to come – a wonderful picture of God’s sovereignty.

Griffith Jones is an example of one who sees obstacles as opportunities. Once again, there is a lesson in that for me.

The Beauty of a Well Written Biography

In my re-reading of Arnold Dallimore’s magnificent 2 volume biography of George Whitefield I have been struck by the qualities of a good biography. Dallimore doesn’t just tell us the story of Whitefield but he adds a wonderful description of the social and religious conditions in England in the C18th. Moreover, he also explores the foundations of the religious groups and societies at the time and assesses their impact on the lives of Whitefield and the Wesleys.

For example, the author describes the Moravians and their amazing impact on the Wesleys but he is not uncritical. Count Zinzendorf had a higher view of the Augsburg Confession than the Bible. This led to Scripture not being given the respect and study it deserved. It was often used in the “lucky dip” method when looking for a verse for guidance – open the Bible at random and place a finger on a verse. Yet the Moravians had a faith and passion that was missing in C18th England and had a deep and profound impact on the Wesley brothers, John and Charles.

The author paints a picture of the times and weighs the positives and negatives. We are reminded that God is always working with incomplete men and women in the development of His kingdom.

The biography is full of delightful digressions such as the a brief overview of the Welsh evangelist who encouraged Whitefield to become a field preacher, Howell Harris.

Lord willing, I will return to this biography on future occasions as I progress through the books. To this point, it has been a valuable insight into Church history. 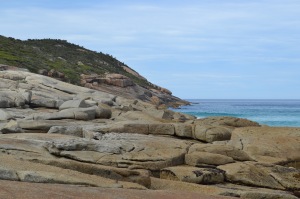 God spoke
into being
Ex nihilo
from nothing.
God’s breath
brought forth
the stars
the atoms
me.

The covenant
Word swept
through creation
and rebellion
empires
and kings.

His Word
sure and firm
whispers and roars
through time
and place
over sea and continent.

The Word
walked among us
and will come again
to reveal
a recreated kingdom
a world reborn
by the
Word.

Between Heaven and Hell

Currently I am re-reading Peter Kreeft’s classic, “Between Heaven and Hell: A dialog somewhere beyond death with John F. Kennedy, C.S. Lewis and Aldous Huxley.” Kreeft, a Professor of Philosophy at Boston College, originally wrote the book in 1982 and updated it in 2008.

The genius of this witty book is that it takes the fact that the three protagonists in this book all died on the same day, November 22,  in 1963. The author then imagines a debate or learned conversation between them as  they exist somewhere beyond death. Kreeft is helped by the fact that he is a Catholic. In other words, a type of purgatory is a possibility, however this is a minor issue in the book. The key element is how the three participants look at heaven, faith and life from their respective world views: Lewis an orthodox Christian, Kennedy a liberal Catholic and Huxley a pantheistic Gnostic.

Issues such as the nature of Jesus, authority, the place of reason in faith, miracles, wisdom and faith itself, are just some of the topics explored. Best of all is that it is a primer in apologetics: defending and explaining faith and the gospel. Peter Kreeft uses his knowledge of Lewis’ work to show how Christians can confidently defend their faith against the critiques thrown at them. This is not unlike the techniques used by people such as Professor John Lennox today.

“Between heaven and Hell” is not a long book and could be a valuable resource for many people – particularly Christians who sometimes find themselves lost for words when their world-view is attacked. I am enjoying this book again because it reminds me that the evangelical Christian faith is not loopy, as the world at large tries to portray it, but a well founded faith and like every world-view starts with presuppositions or “faith”.  Having taken the step of faith, the Christian position has a beautiful harmony and unity. I for one, often forget that.

Now faith is confidence in what we hope for and assurance about what we do not see.

I spent the morning scrubbing smoky soot off wooden furniture. The problem is that the smoke smell burrows itself into the wood. The smell is difficult to eradicate. Hard rubbing with “smoke sponges” and then turps and finally applying wood restorers is required. There are two elements: the appearance and the smell. Sometimes it looks o.k. but still smells and on other occasions it is reversed.

As I was rubbing away my mind wandered to the work that God needs to do with us. Believers know that they are justified by Christ’s sacrifice on the cross but it is the daily sanctification, scrubbing with the smoke sponge and the turps by the Holy Spirit, that is the on going work that is required. To be justified means we look like the product in the catalogue and is the way God sees us through Christ, but sanctification acknowledges that the bright shiny newness of the catalogue, in our earthly life, has never really existed.

This renewing process is described beautifully in Philippians 2:12&13, “Therefore, my dear friends, as you have always obeyed – not only in my presence, but now much more in my absence – continue to work out your salvation with fear and trembling, 13 for it is God who works in you to will and to act in order to fulfil his good purpose.” And, it is an ongoing work, “And I am sure of this, that he who began a good work in you will bring it to completion at the day of Jesus Christ.” Philippians 1:6.

The moral: when there is unpleasant cleaning to do, use it as a reminder of the work required on us – especially the, hard to get, inside.

And the words of the Lord are flawless,
like silver purified in a crucible,
like gold refined seven times. Psalm 12:6

We often tend to think of our age as particularly evil but when we read Psalm 12 we realise that David struggled against great evil too. He often felt helpless against its onslaught.

It is a relevant psalm for our time when advertising dominates our lives. The huge amounts spent on political campaigns to sway a small percentage of voters comes to mind. “Spin doctors” try to flatter and manipulate us. Then we have the culture of celebrity where their position and fame is used to make us believe …. whatever. I am reminded of a  certain TV host of Africa American descent, amongst many, many others.

We have two choices: we either join the throng of deceivers and deceived or we run to God for His protection. His protection came in the form of one who said, “I am the way and the truth and the life.” and “Then you will know the truth, and the truth will set you free.”

David recognised his own helplessness because by nature he too was like the deceivers, but in God’s promises his life would have a completely alternative and truth led orientation through the promises of God. In God’s arms he could begin to see life differently.

A Few Photos of Our Three Day Escape 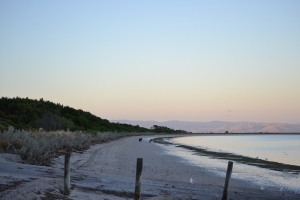 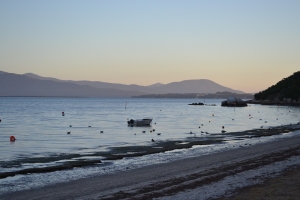 The colours of dusk at Yanakie 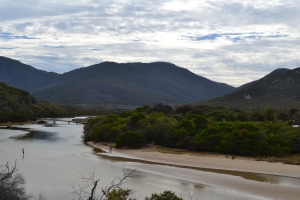