There are many things I am nearly addicted to: cheese, ice cream, a good wine & etc. The fear of weight increase and clogged arteries keeps that controlled, but we have a family addiction. I don’t think I have written about it much. Our friends know about it and if they don’t approve they at least quietly acknowledge my/our condition and just mutter quietly among themselves.

This obsession revolves around plastic – a plastic block. Yes, you have guessed – Lego or as the Americans say Legos. We started the collection about 35 years ago. Now that our last daughter has fled from the house we can finally take it out of cupboards, from under beds and on top of wardrobes as, at last, we have a room to store it in.

Over the years we have found a myriad ways to justify collecting and building with this Danish building material. Here are some.

The moral is: If you have an obsession or addiction, ensure that it is a healthy one. 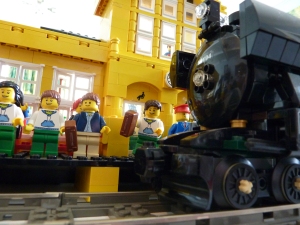 6 thoughts on “Our Lego Addiction”