There was a written notice above him, which read: this is the king of the Jews. One of the criminals who hung there hurled insults at him: “ Aren’t you the Messiah? Save yourself and us!” But the other criminal rebuked him. “Don’t you fear God,” he said, “since you are under the same sentence? We are punished justly, for we are getting what our deeds deserve. But this man has done nothing wrong.” Then he said, “Jesus, remember me when you come into your kingdom.” Luke 23:38-42 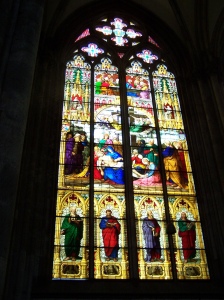 There is remarkable incident is recorded by Luke in the 23rd chapter of his gospel. Jesus is on the cross and the Roman soldiers have mockingly added a sign that declared that Jesus was the king of the Jews. One of the criminals joined in the abuse of Jesus, but the other, in what can only be described as Spirit filled insight, rebukes his comrade in crime and asks Jesus to remember him when Jesus enters his kingdom.

Jesus replies with those amazing words, “Truly I tell you, today you will be with me in paradise.”

In a moment of revelation the second criminal understood he was in the presence of a king – more than a king, but THE king. This king wasn’t just the king of the Jews but the king of all creation. In a few days this crucified king would reveal the extent of that kingship when he arose from the dead. Jesus was the conqueror of death, destruction and decay!

This single event, the death and resurrection of Jesus, is the motivating reason for Christian education. Christian education has the role of declaring that Christ is truly the king over all creation. From Art to Maths, and Food Tech to English, these areas of creation (and every other one) are also what Jesus died and arose for. Christ died, not just for a loose collection of individuals but for the kingdom that Adam and Eve had plunged into disarray at the dawn of creation.

A Dutch theologian, Abraham Kuyper, famously put it this way, “There is not a square inch in the whole domain of our human existence over which Christ, who is Sovereign over all, does not cry: ‘Mine!”

This Easter it is crucial to remember that Jesus died for our sins but let us not forget that he also died for a creation that, like us, needs to be redeemed. Jesus is our Saviour and also our King!