My frame was not hidden from you when I was made in the secret place, when I was woven together in the depths of the earth. Psalm 119:15 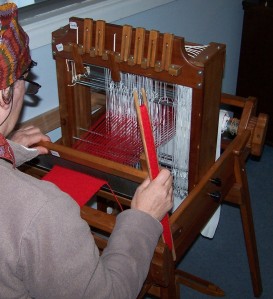 Weaving has a long tradition in the Bible. In Exodus we are told that the Tabernacle curtains were woven, in Psalm 139 the psalmist writes of God weaving us together in the depths of the earth and, of course, Jesus’ tunic at the time of his crucifixion was woven, seamlessly .

Why am I writing about weaving? Well, my wife of many talents is adding this skill to her list of craft abilities. Every time she expands her skills I feel like more of a clutz, but it also reminds me that God has made us all unique and special. Howard Gardner’s multiple intelligence theory reminds us that we all have areas of gifting/smarts/intelligence. Really, however, God has been telling us that all along in His Word.

In the Psalms, David tells us that we have been wonderfully  made. In fact, much of Psalm 139 reminds us that we are special to God. There are echoes in this Psalm of the fact that we were made in God’s own image. We are not rubbish to be thrown away. Even though we have rebelled and sinned against God, the God of Psalm 119 sent His son to die on the cross in our place.

Like me, you may at times feel like a clutz, or a failure or unworthy – supply your own put down, but as God’s creation and with the possibility, in Christ, of being His renewed creation, there is not no need for any of these feelings. So when you feel like a clutz, return to Psalm 119 and be reminded by the Psalmist how special you are.