Living Life ‘to the Full’

One of my classes is studying the Bruce Beresford film “Paradise Road”. The film tells the traumatic and true story of a group of women of various nationalities, interned in a Japanese prisoner of war camp during WW2, who establish a “voice” orchestra. 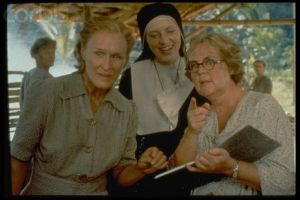 A Scene from Paradise Road

It is a confronting story of cruelty and bravery, despair and hope. I find the film poignant as it has been my privilege to personally know a number of people who had been in similar camps during the war. There was a husband, wife and children who were separated for much of the war with the wife and children in one camp and the husband in another. I also came across ex-soldiers, as well as those who had been teenagers in camps, and others.

Years later I could still see the effects of the trauma on their skin, through nervous tics or recurring ailments. But my most striking memory is that nearly all exhibited an overwhelming sense of grace and an understanding of the value of life. I have also noticed this in the holocaust survivors I have met. These people had an awareness of the value of life and the need to live this life to the full.

War is ugly and we wouldn’t wish it on anyone yet there are lessons and truths that we miss out on as we live our self satisfied, middle class and materialistic western lives. Someone once said we need the “moral equivalent of a war”. What he meant was that we need the personal challenge to comprehend the deep truths and realities of life. In my life as a pastor I knew that I could usually count on the people who had been through really tough traumas to support and care for those around them. They knew the power of a helping hand or friendly word, or ready shoulder and were willing to serve those around them.

I know in my own life that my first close encounter with death was when our son died. Through this tragedy it was as though God opened up the depth of what the task of a pastor really was. Any glibness or superficiality was rubbed away. The “why” question still recurs years alter, but the life deepening consequence was undeniable.

Should we look for death and war? No, not really, as they are ugly reminders of the impact of sin. However, when they happen we can also appreciate how our our eyes and hearts are opened to what it means to serve like Christ.

In Paradise Road the women could simply have put all their energies into surviving but some realised that there is more to living than just surviving.

3 thoughts on “Living Life ‘to the Full’”